After creating my first blog, coming up with another topic was extremely difficult but after long contemplation, I figured that softball is something I know a lot about and find very interesting. Not only is softball a sport I love but it also deals with tons of physics.

Batting: In order for a batter to create a good hit at bat they must hit the ball in the "sweet spot" on the bat. The sweet spot is where the smallest amount of vibration exist, which maximizes the energy transferred and the distance the ball will travel. How do hitters know they hit the "sweet spot"? Well, when one hits the "sweet spot" the stinging feeling they feel in their hands will be dramatically less unlike if they hit the ball near the barrel of the bat. However, even if you do hit the ball in the "sweet spot" physics shows that the reaction force is always equal to zero no matter where you hit the ball. Lastly, Newton's First law of motion: " An object in motion tends to stay in motion until acted upon by an outside force," explains exactly how hitting can be explained by using physics. If the batter does not hit the ball as the pitcher releases it from there hand the ball will continue in the same path until the bat and ball make contact with one another which would change not only the path but the velocity.

Pitching: Pitching involves a TON of physics, especially in the various amount of pitches the pitcher creates to throw the batter off guard. In order for the pitcher to create a prefect pitch and get it over the plate they must produce an underarm motion, making one full rotation of the arm, which is known by most softball players as the Windmill. Not only is the windmill motion important, but the pitcher must remember to snap their wrist when the ball meets their waste. But for this to be successful the pitcher must build up her momentum from her legs as she brings the ball through the windmill position. Not only does the pitcher need to make sure that she has the prefect stance and rotation, but velocity is very essential as well, if the pitcher does not increase their velocity when pitching the batter will have a greater chance to hit the ball!

Hopefully after reading my blog you learned more about softball, but even more importantly physics. 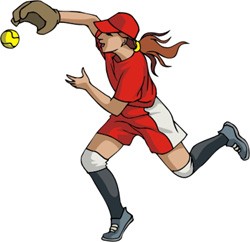