Recently I've come across a physics paper describing a certain way of time travel using the awesome theme of Doctor Who (as well as a Portal reference) to explain things. Explaining the name is something I'd rather leave to the creators of this theory though, so here's that:

The name refers to a bubble (a Domain) which moves through the spacetime at speeds greater than the speed of light (it is Achronal); it moves backwards in time (Retrograde to the arrow of time outside the bubble); and finally, it can transport massive objects (it is Traversable)

So, what exactly is this TARDIS? Glad you asked. And if you didn't, well, too bad. You're going to hear about it anyway. Or just leave this post. Either way. TARDIS. So. Basically. A light cone is a boundary that shows you what and where can be traveled. If a point source of light were turned on and you watched its 2D passage through time, it would create a cone. 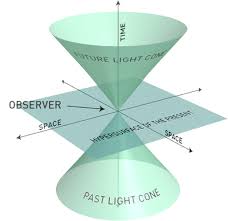 this probably explains it a bit better than I can

Anything outside of the light cone would therefore have to move faster than light. Past the event horizon of a black hold, light cones all point inward and so no matter can escape without going faster than light and therefore backwards in time. Well, what if you could bend the direction these cones, and time itself? By creating a circular path (which would require faster than light particles - whoops), you could go back in time, then accelerate forward, even going sideways in time, as long as you ended in the same place you started. Kind of like a loop. However, the fun parts happen when you splice these achronal loops. You could end up in a point in time just prior to when you first started traveling, or if you cut a "donut" (that's what they seem like to me) in half, you could stay moving backwards in time, essentially becoming antimatter (note: look up single electron universe theory if this seems interesting)

As always, the source explains it much better than I, along with diagrams and other cool stuff and even fandoms.