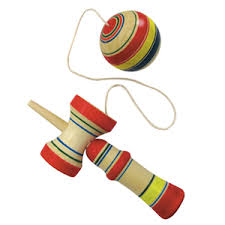 Anyways, it took me awhile to find this picture, as apparently Google has no idea what you're talking about when you search "swing ball on string into indentation" or similar phrases. Finally, I found it's real name - "Cup and ball"...this is probably because many of them look like this instead of the above picture: Yeah. Anyway, I happened upon this game (mine looks like the first picture) a few days ago hidden in a drawer in my house, and proceeded to play with it for the next 20 minutes...insisting, when my mom began to question my level of productivity, that I was doing homework - physics homework.

So onto the physics part. Of course, when you swing the ball around to land in the cup, the magnitude of tension in the string changes. At the bottom of its path, tension (T) = mg+mv^2/r, as tension and force of gravity(mg, m being the mass of the ball) act in opposite directions. For the top, however, T = mv^2/r - mg, as T and mg both act downward. On the left and right sides of the circular path of the ball, T = mv^2/r as T acts in the horizontal direction and mg in the vertical.

When you try to catch the ball in the socket, you'll notice you can't just hold your hand steady and hope the ball will magically land in the socket - even if you have it perfectly lined up, doing that will just make the ball bounce back out. In order to catch the ball, you have to lower your arm as the ball lands in the cup, cushioning the impact - similar to how you would bend your knees when landing on your feet from a jump.

So there you have it, the physics of the ball-and-cup game. I miss these childhood simplicities that could entertain for hours. Hope you enjoyed!