Cars are complex machines. The run off of the oxidation and ignition of gasoline which drives several pistons attached to a drive shaft which spins the wheels. However a certain car made by a certain company named Tesla runs entirely differently. It runs off of batteries which power an electric motor which sends power to the wheels. However if this process doesn't involve violent explosions like a gas car does, how come a few Tesla's still catch fire?

Well its all about what the batteries have inside of them. Consider this, you are driving you brand new Tesla down a country lane. Of course, with it being a Tesla, you are doing a steady 50-60 mph down that lovely country lane. Now imagine that you lose control of the car and smash into the curb on the side of the road. If you were in a gas car, no problem, you might have a ruined bumper, but you would soon be on your way. However in a Tesla, since the batteries are near the bottom of the car your tale might proceed a bit differently. When you hit the curb if something manages to get through the thick battery shield, (we are talking worse case scenario here) and punctures one of the large lithium-ion cell batteries and the fluid spills out of which contains pure lithium you might be in trouble. Because lithium is part of the alkaline metal family, if it becomes exposed to the water vapor in the air or on the road a violent reaction could occur which might include many small explosions and eventually a fire.

Lithium-ion batteries are great and can hold immense amounts of charge, however it is also a small bomb if it overheats and ruptures. Fun Stuff. 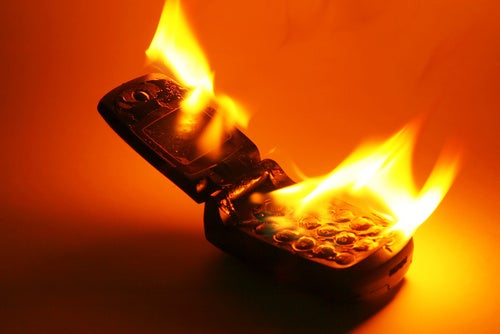