There's no equation that proves karma/jinxing is actually true (although if I were to create one specifically for karma, it would be extremely similar to Newton’s third law: for every action, there is an equal and opposite payback), but I am convinced Mr. Fullerton jinxed me. Maybe I fibbed a little about being an outstanding driver in my most recent post because it took me approximately 7 days, 18 hours and 26 minutes to get into my very first car accident!!!! The lady was wicked nice though so if there's something to be happy about, I was happy I hit her and not some mean old lady. Anyways, I'll tell you what happened in a nutshell: my neighbor and I just went to Dunkin Donuts and I was making my way back towards school. We reached just before the field house where we were stopped at a red light. Cars ahead of me, drivers were slowly inching forward and I took my foot off the brake to allow myself to inch forward as well.  Just as we began moving, my neighbor hit my Hazlenut Coolatta (so sad :-() over and I spun my head to take a look at the mess that was made reassuring him that it was fine and it was just an accident.  The moments my eyes were taken off the road, I hadn't noticed the car in front of me stop, so as I looked up to focus on driving again it was too late. My car rear-ended the car in front of me. Some paint was exchanged by both cars leaving my 2013 Black Dodge Avenger with a zebra-designed front bumper and hers, some gold-ish type of SUV looking thingy-ma-bobber (excuse my lack of knowledge of car models) with a touch of black on her rear bumper (it really enhanced the gold, I must say). This was an example of an inelastic collision. The mass of my car was lesser than that of the other car and she had a velocity of 0 m/s, therefore the equation would be =(+). However, momentum and energy was probably not conserved due to brakes, friction and a whole bunch of other factors.

Key take-away: I need to invest in a car that cab detect a car/object ahead/behind me and will brake on its own so I won’t get into another accident :-)

P.S Like I said in my last blog post, blame the blonde, nose-pierced driving instructor at East Rochester for all damages. 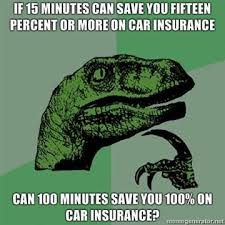