Ever wondered how the Universe will end? Well, if you’re not religious, there’s a myriad of options to choose from.

Lots of people know about the Big Crunch. In short, this theory dictates that at the end of the Universe’s lifespan it will stop expanding and begin to collapse in upon itself, condensing into an infinitely dense singularity. However, soon the outward pressure will trump the inwards force of gravity, and the Universe will explode in one massive supernova and be created again. This cycle of Big Crunches and Big Bangs is thought to have continued on forever, and will do so for all of eternity.

There’s also the Big Rip, which says that the acceleration Dark Energy causes on the Universe’s expansion will be too great for gravity to overcome. This acceleration begin will begin to rip large objects apart like galaxies and solar systems. Eventually, it will tear down smaller and smaller objects into their components until all matter in the universe is the smallest unit of mass in existence.

However, the most plausible scenario is currently the Big Freeze. All things in nature wish to reach a maximum state of entropy, and heat disperses evenly. So, as the universe expands forever, this heat will continue to be spread farther and farther apart. As large objects and even molecules are destroyed, the heat they create will dissipate into the abyss forever. Eventually, all stars will go out, and the Universe will be a frozen wasteland.

Enjoy your time on Earth while it lasts, ‘cause it’s gonna get pretty cold soon! 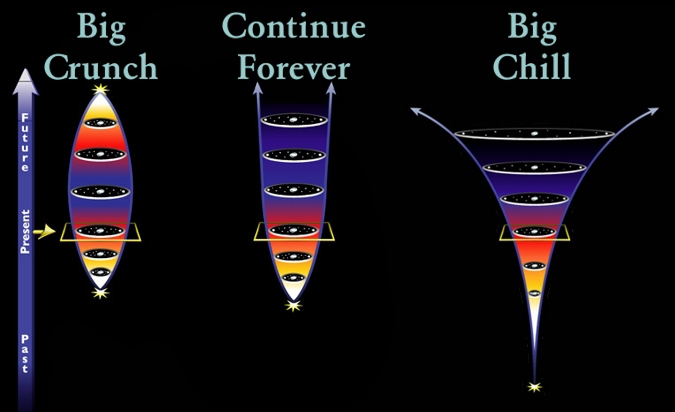