This past Friday, our class attempted the "Shoot Your Grade" lab, in which we had to place a book on the floor where we expected a projected ball would hit. As a class, we all failed the lab because the book was not placed where the ball hit. The main reason for our failure was lack of communication between our class mates. Doing a lab with 25 people and having all those people working to solve the same problem can easily be chaotic and confusing, and it definitely was. If we had established agreed upon measurements, our final answers for where to place the book would have ideally agreed with each other (as long as people didn't make mistakes in calculation, or if they did make mistakes, they would have been able to identify where they were). Instead, we all calculated many different x velocities and ended up just picking one of them due to lack of time. The one we chose happened to be incorrect.

In order to solve the problem, we needed to determine the initial velocity of the ball when shot by the launcher. In order to do that, we measured the angle at which the launcher was pointed, which was about 6 degrees above the horizontal. We then used a stop watch and took a slow motion video of the ball being shot to measure the time the ball was in the air. This was one calculation that varied between class mates; we all used different times in our calculations which gave us a wide range of horizontal velocities. Then, we measured the horizontal distance which we did agree upon. The horizontal velocity was calculated by doing horizontal distance divided by time. From there, we measured the height of the projectile from the floor and used that height, the acceleration due to gravity, and the time in order to find the vertical velocity. Here was where our calculations were incorrect. We calculated the vertical velocity incorrectly because we made the y displacement positive and the acceleration due to gravity negative, even though they were in the same direction. Therefore, vector direction was our biggest fault in determining the initial velocity.

I did the problem again using the same measurements but designating down as positive and up as negative and keeping the direction consistent. Then, I calculated that the initial velocity to be 4.68 m/s. When using this as the initial velocity and using -4 degrees from the horizontal as the angle for the second scenario, I calculated that the horizontal distance should have been 1.997 m. Images of my calculations are attached below. 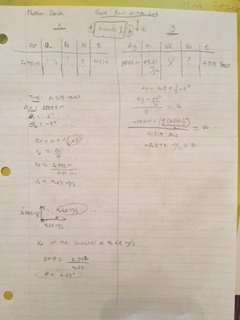 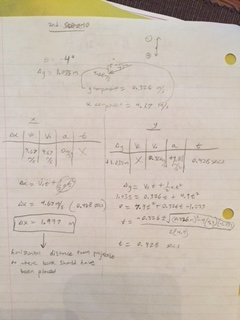