I recently got an 8 week old kitten on September 20th and have been spending all my time watching her and keeping her out of trouble (not only has she stepped on my keyboard an uncountable amount of times while I wrote this, she also deleted the whole thing twice). I figured I'd kill two birds with one stone and do some physics with her in mind.

She often jumps off of my bed, so I figured I'd find her final velocity the instant before she hits the ground. I know her vertical acceleration due to gravity is 9.8 m/s2, and that her initial vertical velocity is zero, as well as her horizontal acceleration. I filmed her running off the edge of the bed and determined she covered around 13 cm (.13 m) before she left the bed, and she did this in around .4 seconds. I also know she falls about 42 cm (.42 m) when leaving the bed.

I determined her initial horizontal velocity to be .325 m/s by using the equation v = x/t. I then found the final vertical velocity using vf2 = vo2 + 2ax, which gave me 2.87 m/s. I then used pythagorean theorem to attain the true final velocity, which came out to be 2.89 m/s.

I decided to convert this into some other popular units, just because I was curious, and came out with 9.48 ft/s and 4.98e-7 mph.

And here's a picture of her while I'm writing this blog post. 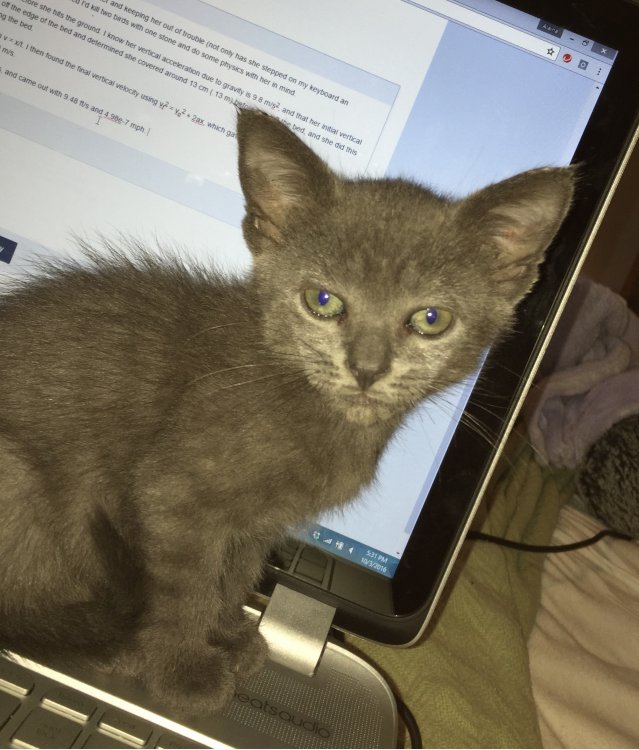