Before deciding to make this post, I really had no idea how a touchscreen worked. However, after doing some research it's actually pretty interesting. Most modern touch screens, such as what is most likely on your phone is known as a capacitive touchscreen, and that's because it essentially works by acting as a capacitor. A capacitive touch screen is made up of a few essential parts, the LCD or OLED screen itself, a glass or plastic cover used as an insulator that is covered in a clear conductive coating, and sensors to measure change in emf and determine where you are touching. The following diagram gives a basic idea of what a capacitive touchscreen is made up of: 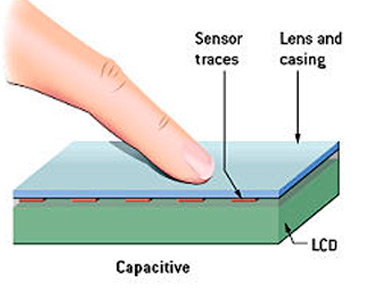 Now into how one of these things actually works. Since the glass or plastic component of the assemble is coated in a conducting layer, when it receives a charge it in essence becomes a capacitor, 2 conducting layers separated by an insulator. Since people are also conductive, when you touch part of the display, your finger adds surface area to the existing conducting surface, which ultimately results in a drop in emf measured by sensors attached at the edges of the screen which tell the device you were using where exactly on the screen the input was, and what to do as a result of that. This is something I have been wondering about for a while, but just never really when out of my way to look into, and now that I have, it seems blatantly obvious since capacitive is literally in the name, but it was interesting to learn about regardless.