The holy grail of serves in volleyball is the jump spin serve. A serve going over a 2.43 m (7' 11 5/8”) can be understandably difficult for many, but higher level players are constantly trying to deliver more speed and directional movement to the ball in order to make it harder for the opposing team to return. The jump spin’s first benefit is, that by jumping, added height is given to the point at which the ball is contacted.  By doing this, the difference in height between the ball and the top of the net decreases, allowing for the serve to follow a flatter path than if hit while standing. This effectively reduces the travel time of the ball by making it a one sided curve rather than a parabola.

The added benefits of a spin serve is that the ball can handle much higher speeds than a float (no spin) serve, and requires more effort to pass. The Magnus effect is to thank for this.

What happens is that, as the volleyball player starts their approach, they throw the ball up giving it spin away from themselves. They then jump and contact the ball as it spins, giving it the topspin required to achieve the effect. To summarize the Magnus effect, when an object rotates, it has air which clings to its surface and follows its rotation. This layer then collides with oncoming air, which hits the ball as it travels in the horizontal plane. The deceleration caused by this collision creates, in this case, a high pressure pocket of air above the ball and a low pocket of pressure below. The object then is acted upon by a lift force, in this case known as a Magnus force, due to the object being compelled to travel in the direction away from the high pressure pocket of air to the low pressure pocket. 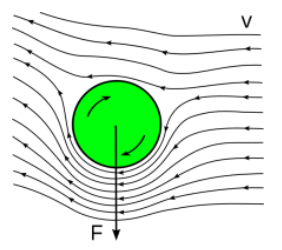 Effectively, the velocity can be increased since the greater the spin the faster the ball will drop.  When passing the ball, players must also be cautious.  If it hits their arms without providing some sort of counter spin, like pulling their arms in as it hits, then the ball will keep its spin from friction, and go off the passers arms behind them.

The jump spin serve is a mean serve on many levels, and those, like TheNightKing (shout out), who can do it fairly consistently, are valuable at varsity level and nearly necessary to play in higher levels. Just make sure you put spin on the ball before you contact it as hard as possible, otherwise it will fly into the next county instead of hitting the court.

Here are some other videos on the Magnus effect:

Magnus effect explained and its applications:

Here is that KFC I was talking about...