Besides acting as an eye catching graphic, this animation shows the interaction between two bodies which causes gravitational waves.

Amidst increasing international and domestic tensions, it is hard to find any news agencies talking about 1.8 billion year old news anymore. This week, LIGO observatories announced the detection of gravitational waves back in August caused by two colliding black holes. It is estimated that both black holes had the mass of 53 suns.

As for what gravitational waves are, they are ripples in spacetime caused by usually very large gravitational interactions. This is not the first time they have been detected.  The two VIRGO observatories, one located in Washington and one located in Louisiana, were able to narrow down the region of space for prior waves origins to arcs which could fit over 3000 full moons. A new detector in Italy, named Virgo, became the key piece in triangulating this signal to a smaller point in space of only 300 full moons. 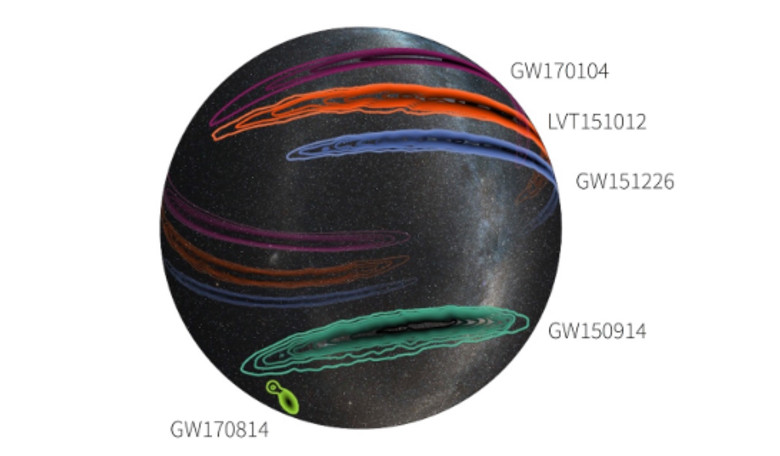 This image shows the areas of detection for the previous gravitational phenomena projected onto a spherical representation of the milky way.  The latest (GW170814) is substantially  smaller in area than the others.

As for why this matters, within the next few years another LIGO detector is scheduled to go online in India and another, named KAGRA, in Japan in order to make this area smaller. The more observatories we have means more accurate readings and decreases the likelihood of any false signals. The more data we can receive the more we can learn about the behavior of the universe.
This latest reading confirms that gravitational waves have 3 dimensional polarization further proving another part of relativity. In the future, scientists wish to learn more about the exact moment of the collision, specifically, if they are lucky enough to catch two neutron stars and see any radiation. They also wish to know if any matter or light is emitted from these collisions. Frankly, the information we know about is practically nothing. At this point, any data is vital to expanding our understanding of the universe and bring some method to its madness. Hope everyone enjoys their week and puts their ear to the ground on any future information.

I don't claim to be an expert in this field. In fact, I am not even close, so if you wish to know more here is the link to their website: