So over the weekend, I've been thinking about how much worse my grades have become recently. Long story short, this got me thinking about retarding forces, and a wonderful example to share with you all.

Now let's say that Mike dropped one of his sandwiches off the edge of the helicopter, and reached out to grab it, but accidentally slipped off the side. Nick, in a feat of heroism, grabs Mike, but was sadly too late to stop him, and ended up falling off the side as well.

For convenience, let's say that the force of air resistance is equal to -bv, and b = 9.8 for both of them, and they both fell for long enough to reach their terminal velocities. 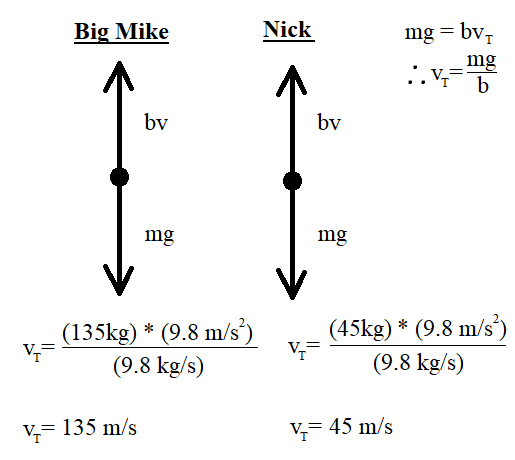 Because Big Mike was moving faster than Nick, he broke their safety net, so Nick smashed into the ground and died too.

If only Mike had kept his gym membership, he and Nick might've survived that fall.