Over the thanksgiving break, I watched one of my favorite movies, Talladega Nights. The movie is about a race car driver and one of the moves that he frequently uses to win is called the slingshot. In this maneuver, the driver would get really close behind his teammate to draft up speed and be able to pass the car in front of them. At first I didn't understand how this worked, but I dived into some of the physics behind it to get a better understanding. The slingshot maneuver, which is also known as drafting, is not only used in race car driving but also in other sports such as cycling. 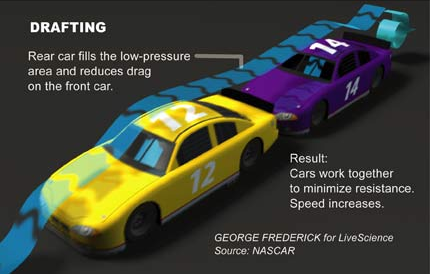 In this imagw, you can see how drafting works and enables the second car to go faster. The second car gains speed when it gets right up behind another driver because the first car is keeping the second car from being impacted by wind resistance or drag forces. I watched cyclists use this technique in the Olympic events last year in order to gain an advantage. Towards the end of the race, the riders often go into a slipstream where the rider trailing gets really close behind the leader so that pedaling is easier because there is less drag force acting on them. Then when they have saved up enough energy, they are able to cycle past the leader and win the race. You can see this demonstrated in the video from the link below.

This is a pretty clever technique that can change the outcome of sporting events and it was interesting to understand the physics behind it.