I have thought for a long time about 'truth', what it is and how to know it. Many things have a claim to 'truth' but the honesty of these declarations, all various and in disagreement, speak only on the obscurity of 'truth'. What holds fidelity in all contexts about 'truth' is that it is equivalent to reality and absolute certainty. There is no error in 'truth', it is the absolute security of fact and foundation and seemingly, by notions entirely self evident, Neil deGrasse Tyson holds a piece of the 'certainty' pie.

Really, his twitter account speaks a great deal on his ardor for science and scholarship, passion for science fiction and his penchant for relating information. Neil deGrasse Tyson's tweets, nearly each and all, speak of science as a necessary fact or 'truth' to describe our world. But my consternation, my nit-pick, so to speak, is how obnoxious and alienating his media tends to be. As a figure of pop-science, I cannot fathom how, in my sparsely condensed brain cells, anyone would find pedantic, unamusingly pompous and disingenuous diatribe on science trivia to be insightful. If my dreadfully verbose locutions are even indicative of my sarcasm and ornery wrath, using science as a pretense to patronize a generation of presumably young followers is profusely wrong and unhelpful. But hey, I am just a humble student, my say is not to be treated with the same gravity as Carl Sagan's premier astrophysicist and really, this melodrama is all for my student's blog. Still here are examples, courtesy of whosoever took these screenshots. 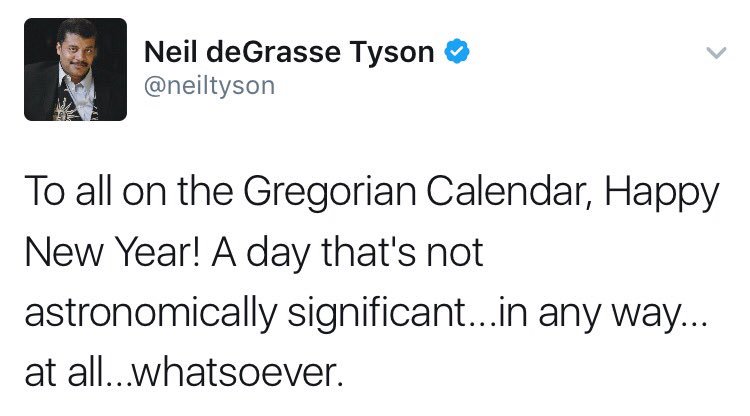 I suppose, for some of us, especially when it seems as if we have much to be thankful for from science, it is somewhat of a second nature to use science to lend credence or 'truth' to ostentatious claims of this or that for validation but these are ultimately missteps.

Post Statement: I had a lot of fun coming up with words, being on twitter and doing homework at once. Happy New Year.