“Alright stop, collaborate and listen
Ice is back with my brand new invention
Something grabs a hold of me tightly
Flow like a harpoon daily and nightly
Will it ever stop yo I don't know
Turn off the lights and I'll glow.”


Why would I start this blog up with Vanilla Ice’s song “Ice Ice Baby”? Well Ice is the subject of today’s blog. “BUT TPP, HOW MUCH CAN YOU TALK ABOUT ICE?” I hear you ask off in the distance from behind your computer… well, honestly, a lot. I love ice, from chilling hot summer drinks, to fishing through it in the winter. In the Northeast, we get so much of it that you have to not fully hate it to live up here.

Did you know there is more than one type of ice? Actually, there are at least 17! Under normal atmosphere and temperature we see hexagonal ice (or ice I). By changing pressure and temperature, the other forms can be created from here. The table below shows how they are formed. And with hexagonal ice forming polar bonds, it is able to expand up to 9% of its original volume in freshwater. We have all seen the damage this can do in potholes in the road, but how much force does it have? Well ice can withstand 43,511 pounds per square inch before it turns into ice II. So it is very strong, to the point that instead of continuing to expand, it turns into another type of ice altogether. 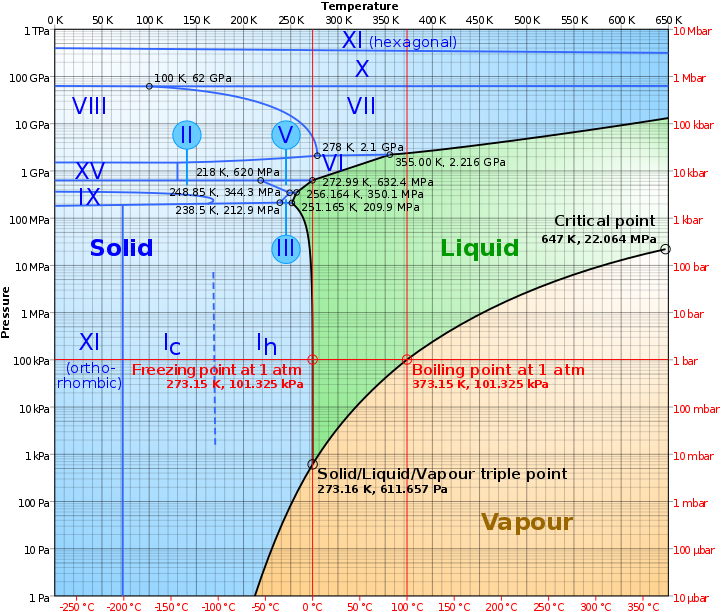 This table shows a few of the different types of ice and their required conditions they need to form.

The first property I want to discuss is why ice is so slippery. The truth is dry ice is not very slippery at all. The problem occurs when melting begins. This can be either due to increasing temperatures melting the top layer, or the amount of pressure being placed on its surface. Pressure has much more to do with the phenomena than you think as the more pressure something applies to the surface the pressure increases and results in a lowered boiling point. This is an obvious problem for drivers in the winter who slip and slide due to the weight of their vehicles. But, while it can cause chaos on the roads, it is what gives joy in ice rinks everywhere. Ever wonder why skates are blades? That's because it centers all of one's body weight on an incredibly small area in order to maximize psi. The result is a smooth glide across a thin layer of water.

The second property is that it floats on water. I'll gloss over this since it has been ingrained in us since 3rd grade at the latest, but the truth is that this property is one of the most important. If ice simply sank and became denser whenever it froze then it would make it much harder for life to survive during times of cooling. An example would be the microbes found underneath Antarctic ice which haven't seen the light of day in millions of years. The fact it floats helps us in the summer with our hot drinks, but also when I ice fish in the winter. I can confidently place myself on four inches of black ice (not white ice which is much weaker as air is trapped in it) and I know due to its strength and buoyancy my bodyweight will be safely kept out of the freezing water. Ice is never something I mess around with, just because ice is thick in one spot doesn't mean it is anywhere else. I guess I'm just trying to say don't do anything dumb… on a physics board… filled with incredibly bright kids.

Anyways, that's my rant about ice. There's other topics I may touch in the future, such as the triple point of water, but for now I'm just going to chill out. I also have some awesome videos for you guys reading this far.

This video, while sounding eerie and like the ice is breaking, is actually the sound of ice forming. As it expands and grows it creates tiny pressure cracks which give off these odd sounds. This clip shows the full range of the ice singing from bass tones all the way to high pings.

This video is taken from planet Earth and shows another odd behavior of ice as it forms in salt water.

As always thanks for reading! - The Peculiar Particle