Who doesn't like magnets and shooting things? Thankfully, a Gauss Rifle includes both!

This is a simple demonstration of a Gauss Rifle - it's safe, and provides a great visual of what's happening.

Quick disclaimer: I'm not what most people call a "smart" person, so chances are I don't actually understand what's happening, but I'll explain it best I can (I think it's simple enough that I shouldn't screw it up too badly, though).

The setup includes multiple magnets fixed in place, each with two non-fixed ball bearings as shown above. A trigger ball bearing is rolled toward the magnet, and accelerates as it gets closer to the magnet, until it collides. When it collides, it's momentum is transferred through the magnet and to the ball bearings on the opposite side. The second ball bearing on that side then gets the momentum, similar to a newton's cradle. It then disconnects from the magnet, since the force is strong enough to disconnect it from the magnet system due to it being farther away or something (That's what they said in the video). It then rolls at a higher velocity toward the next magnet, and this continues on to the end, where the final ball bearing gets launched into your younger sibling.

As you can tell, it works. I do have some questions on why, but I'm just going to hold off on further research with the hopes that we learn about it later in class. 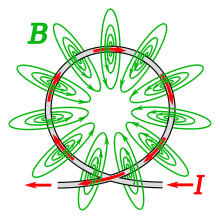 Do that a bunch, and you get an electromagnet. So let's use that to accelerate our projectile rather than wimpy little magnets and the transfer of momentum.

This animation shows a coilgun in action (When a coil is green, current is going through it). It's the same as the ball bearing experiment: a metal projectile accelerates from a magnetic field, and approaches another magnetic field, where it continues to accelerate until it leaves the barrel of the gun.

While doing research, I found a guy on YouTube that made a couple home-made coilguns. If you want, check it out.