What distinguishes music from noise is actually mathematical form.  I find this funny because most musicians I know are afraid of math and claim to be terrible at it.  Noise and music are a mixture of sound waves, but music is considered "ordered sound" while noise is considered "disordered sound".  Music can be separated into different frequencies, some having a more dominant sound, which makes music sound more pleasant.  This is not the case for noise.  However, not all music sounds pleasant.  In order to convey certain emotions in music, dissonance, a disruption of harmonic sounds, is used.  This can be heard often in movies, as it is used to create suspense or uneasiness.  Dissonance does not have that pretty musical sound, but when used strategically, it really adds to music. 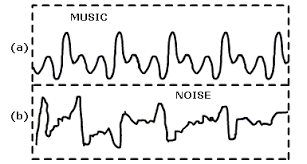