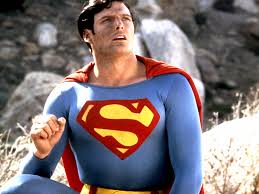 Now, don't get me wrong, I truly appreciate the genius of this handsome devil's creation, and honestly I'm not too educated in all the details. However, part of what makes fiction so great is being able to imagine it being feasible ..and that's not so easy when you have even a basic understanding of physics. Honestly, every experience I've had watching a superman movie starts of fantastic, and then gets interrupted by some obnoxious little inconceivable detail that drives me insane and ruins the rest of the movie.

For one, at least in the movies I've seen, Superman gets his strength because he's from a planet with a much higher gravitational constant. Nice physics-y touch. So this means even as a baby, to be able to move at all he's got some sort of much stronger muscle. With the structure of the human body considered, I really don't see how this is feasible without these muscles being pretty darn heavy. How do his adopted parents just pick him up like it's nothing? Baby or not this kid's gotta be heavy! But then, there's the fantasy factor, I suppose there might be some new biological thing going on there.

So what about flying. Is this magic, or just an extension of his strength? I can't really argue against magic, and I honestly don't know what the intention there is, but there's no way it's an extension of super-human strength. I can see immense leaps that are so huge that perhaps they mimic flying, but he wouldn't be able to bend his path and what-not simply by will of mind.

What's more, how does the guy leave the ground without a mark half the time? I mean, the force to leap as high in the air as fast as he does would be pretty darn significant! Sure, he slams in the ground for dramatic effect all the time, but I think his take off would have a little more bravado as well. I mean, think about it. One second he's on the ground and couple seconds later he's hundreds of feet in the air? I'd say that'd put a crack in any concrete...

And what about catching the tumbling damsel in distress! This is the man of steel we're talking about here; and a super macho man at that! So a macho-man without superhuman strength tends to have pretty dense muscles... meaning the harder you hit him the more it hurts you as well. Superman is indestructable to an extent, so I'm certainly not going to argue that catching someone would do him any damage, but what about the person he's catching?! Someone falling stories and stories down (in many cases easily hitting terminal velocity), and he just swoops in and catches them feet from their imminent death. If you ask me, they should have just met death again in a new manner. For one, that's not NEARLY enough time for a sufficient impulse to be even close to feasibly safe. You'd take all of the person's momentum and jerk them in a completely new direction almost instantaneously... that's a death by broken everything I'd say. Furthermore, if the change in direction didn't kill you, you were caught by two steely arms. At that kind of speed, that'd break quite a few bones by my judgment... so death by broken everything x 2!

I could go on, really, but the more I write the more annoying they get. I suppose it's time to let the classic rest. Maybe the new superman movies won't be so flawed!