...Or in coloquial terms, "My stars, is that ctenophore exhibiting bioluminescence?" You might think that's all glow, but there's more to this jelly's luster. Bioluminescence occurs when a living organism's cells emit light. Common examples include fireflies and angler fish, who use light to find mates and attract prey respectively. These organisms convert chemical energy into light energy, just as a human body would convert chemical energy (like glucose) into mechanical or heat energy.

The above jelly fish Mertensia ovum, also known as the Arctic Comb Jelly or Sea Nut, does emit a small amount of blue and purple light. However, those fancy-dancey rainbow colored adornments on its side are actually caused by-- yep, you guessed it-- thin film interference. Sound familiar (think AP-

Like light being "bent" into it's different rays of color on an oil spill or in a rainbow, the jelly fish has eight columns of cilia that have a similar effect. Besides their fashionable apearence, the cilia columns or "comb rows" also allow the jellyfish to move as well as sense changes in it's surroundings as would a bug's antenna. 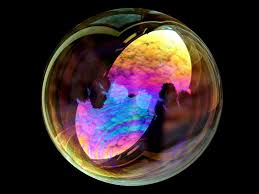 ...On a less-sciencey note, I found this bubble very enjoyable.