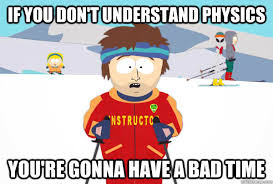 Physics plays a huge roll in skiing--and yes, I've posted about such before, but a 3 day ski trip really struck some new physics relations home.

When turning, bending the knees into the turn, and standing up out of the turn actually makes the turn far more efficent and more fun. Part of the efficiency is simply Newton's law--every reaction has an equal and opposite reaction. By bending, you're thus using your body weight to turn more forcefully with the aid of the shape and design of the ski. Depending on the circumstances of your turn, bending your knees can also flex the skis themselves partially, making them pop back to their normal shape and thus aiding the turn.

Too much wax is a bad thing. After every ski trip good ski care mandates that you wax your skis. This is to help mildly smooth out any small scrapes and to thus make the flat surface smoother, thus creating less friction. However, too much wax can have the opposite effect seeing as wax is...well, sticky, and has a far higher coefficient of friction than the actual material skis are made out of. So if you don't want your skis to catch in snow so much, make sure you wiped off the wax well.

Using the edges is a good idea. Beginners often learn to ski in wedge form, which means they use the outside edge of both skis and basically just plow through the snow. Though this works, its working completely against the design of the ski and isn't exactly efficient. If you ski in parallel thus using an outside and inside edge of the ski, the sharp part cuts into the snow in the curved shape of the ski. This in fact means that (thanks to physics!) using edges allows the skis to do half the work for you! And lets be frank, less work in one slope means more slopes to come! Efficiency is our friend