There are two types of spin that a player can apply to a tennis ball, those being topspin and backspin. What prompted my thoughts on this idea would be my attendance of the University of Rochester tennis match today against Nazareth. As these advanced players made the ball skip and flip and kick every which way, my mind went crazy! :labmate)

A topspin shot is hit by sliding the racquet up and over the ball as it is struck. By dragging the racquet over the ball, the friction between the racquet’s strings and the ball is used to make the ball spin forward, towards the opponent. The shot dips down following impact with the court and also bounces at a lower angle than would a shot with no spin applied to it. As a ball travels towards a player after bouncing, it has natural topspin that is caused by the friction of the tennis court. When hitting a topspin shot, the player is reversing the spin of the ball, which requires more energy. This change in energy from potential to rotational kinetic energy allows the player to effectively execute the top spin shot.

A backspin shot is hit in the opposite manner, by sliding the racquet underneath the ball as it is struck. This causes the ball to spin towards the player who just hit it as it travels away. What is very interesting about the back spin shot and has been proven by physicists all over the world is that hitting this shot requires only roughly about half of the raquet speed of a top spin shot, for to execute this shot the player does not change the rotation of the ball. The oncoming ball bounces off the court with topspin, spinning from top to bottom as it comes toward the player. When a player returns the ball with a slice shot the direction in which the ball spins around the axis of rotation is maintained. From the players perspective, it actually seems as if the ball is moving away from them. 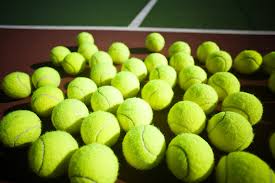