As a baseball player well below average height, I need to maximize every aspect of my game to be the best player I can possibly be. One aspect I have tirelessly worked on is my arm strength and throwing mechanics in order to maximize the velocity of throwing a baseball. Velocity is equal to displacement divided by time. Therefore, if there was more displacement over the same period of time, the velocity would be greater. I throw over the top which means that i have more of a windmill throwing motion rather than having a lower trajectory. There is virtually no time difference between the beginning of my throwing motion to when i release it at a 3/4 arm angle (a lower trajectory) or over the top. But by throwing over the top, my arm travels a little bit further and is therefore displaced more. If I apply that same force over the longer displacement during the same time span, then the resulting velocity of the ball when I release it will be greater from my over-the-top motion rather than a 3/4 motion. So I am trying to maximize every part of my game so I make the best of each day of baseball. So basically what I am saying is... come out to support the baseball team! The first game is home against Greece Athena at 4:30pm! Be there! 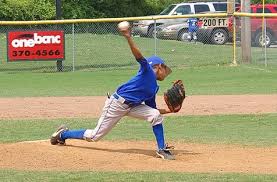