The High School recently put on a musical production called The Addams Family, for stage crew we had to build the set which includes something called a fly system. On this production we had many parts of the set on the system in order to fly them in and out. For instance one of the bars held an entire wall that was used as a backdrop that would only let in small spots of light to resemble stars. This was moved often as the scene changed from inside to outside a lot. The way that the fly system works is a set of counter weights that offsets the weight of whatever is on the bar. 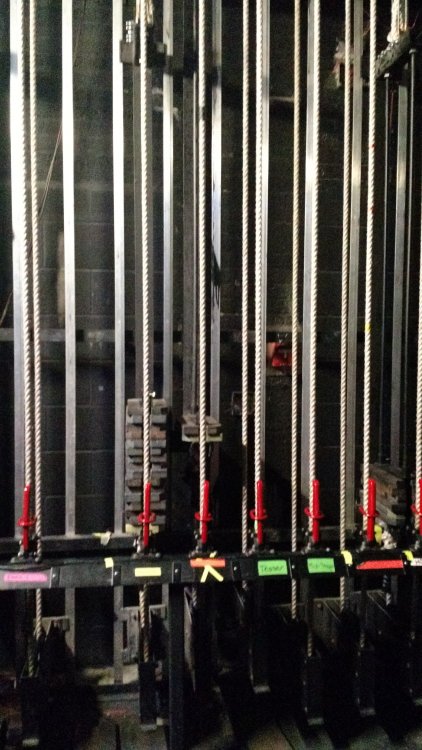 As you can see above the weights are put on a platform that is connected to a long rope on a pulley system, however this pulley system is 1:1 so there is no mechanical advantage. Each weight weighs about 20 pounds, so on the large stack in the picture it is meant to lift something weighing around 320 pounds. The problem with trying to move something so heavy is that the bar is not going to want to move due to inertia as the mass of the system is double the mass of the object being lifted. Another problem that arises is that if we need to make a quick scene change then the fly needs to go up quickly. The big mass and the large speed give the system a lot of momentum that needs to be stopped carefully or else something may break.