Most people think of bowling and think about how much fun they have with their friends and family. For me, I think of bowling for a team with a focus on hitting every pin down for a clean game. Clean games equal good scores and good scores equal a happy Rachel. (Clean games are games with all strikes and spares) For the past 6 years now, I have bowled for the school and on weekends, I participated in a league to improve. Every season has its ups and downs and currently, I am in a hole that I cannot seem to get myself out of

. Consistency is a huge key in bowling and if you do not hit your target on the lanes consistently, everything can go downhill. The game of bowling is also about choices. "Do I use this ball and stand at the center dot and hit the second arrow or do I throw this ball and stand 4 boards to the left of the center dot and hit two boards to the left of the second arrow?" A lot of factors impact your bowling but, one thing will always remain the same: physics. Every lane, no matter which oil pattern, has Newton's Laws all over it. The force that is equal to the mass times the acceleration shown through a grown man throwing a ball that can knock down the pins with a stronger force compared to a six pound ball that is thrown by a little girl. 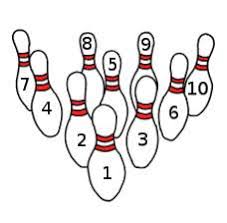 Well that is all for now...