Not too long ago, over Christmas/Hannukah break, I decided to go out with a few friends and their significant others to go bowling. I went into this experience with extensive Wii bowling experience, however I hadn't touched an actual alley for about a year - the formula for success.

It has come to my attention that I might have been our team's downfall (we played in collective teams of 3). As I gave my ball of inertia (2/5 MR^2) an impulse to send it down a low friction alley for (hopefully) an inelastic collision at the end, I realized there was some physics involved in what I was currently doing. Upon contemplation I can definitely pick out some things I might've been able to improve on that when I go bowling again in the distant future.

While I attempted to throw it straight down the middle that simply did not always happen as I fed the gutter better than anyone else could've. I realized that better things seemed to happen when I threw the ball between pins 1 and 3. This is because there is apparently an optimal angle for generating strikes of about 6 degrees with respect to the lane boards. If you hit it straight down the middle, chances are, you'll end up with the deadly 7-10 split (which is nearly impossible to hit if you have next to no background in bowling). If I were to aim for this and use a little bit of curve I might've been able to get more than one lucky strike.

When the ball is released, it first has rotational as well as translational kinetic energy due to a low coefficient of friction between the alley and the bowling ball. If we call a point at the very bottom of the ball point B, the velocity at that point would be equal to v(trans) -  ωR. Soon, the ball will stop slipping and roll with rotational KE only. I was not able to realize that in order to get the ball to hit the pins at this optimal angle, the best strategy was to give the ball rotational velocity in the x-direction as well to give the ball a curved projectile towards the pins, enough for it to last the entire pathway of 60 ft.

If I ever go bowling in the near future I will probaby just aim to get my quota of 7 pins per turn, but it's at least cool to think about all the physics behind it. 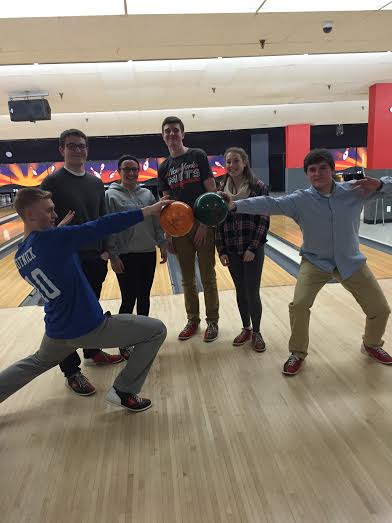