A dog trying to catch a ball in its mouth is like a person trying to catch a football, a lot of coordination and timing. Kinematics could be involved to find the distance, but there is not enough time for a dog or person to calculate that since it only takes a couple seconds for the ball to reach the dog. However, if you ever did want to find the distance, you would need both the x and y components of the initial velocity, acceleration in the y which is equal to 9.8 m/s2, and the time it takes for the ball to reach the dog. It would be a little more complicated than a simple kinematics problem since there is the height of both the person and the dog to take into account.

When I was in Target the other day, I saw a new toy called the Chuckit which is basically just an extension of someone's arm that you can put a tennis ball in in order to throw it farther. 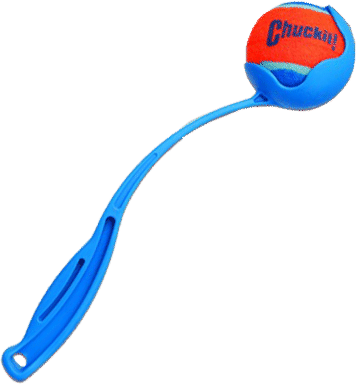 Using the equation torque=Force*radius, the Chuckit increases the length of someone's arm and therefore the radius. By applying the same amount of force, the person can throw the ball much farther by using the Chuckit because of the increase in torque. So, if your dog isn't getting enough exercise from you just throwing the ball, add more length to your arm to throw it farther!