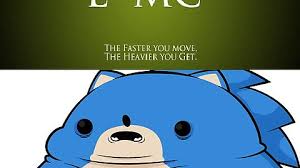 I'm not sure if you will get this meme but it's sonic the hedgehog, notorious for being fast, clearly enthralled by this knowledge. I found it pretty amusing.

Did you know that if you run really fast, you gain weight? Don't freak out, it's not permanent nor a noticeable amount. But say you ran as fast as the speed of light, the speed limit of the universe, and someone gave you a push. You wouldn't be able to go any faster, but you gain extra energy, and it's got to go somewhere. Where else but mass? Due to relativity, mass and energy are equivalent. This is highlighted by the universal equation of E=mc2. The more energy you put in, the greater the mass becomes. Unfortunately, this is basically negligible at human speeds, so Usain Bolt isn't noticeable heavier when running than when still. However, once you reach a decent chunk as a fraction of the speed of light, your mass will start to increase rapidly. Thanks, Einstein!

And thank you, for tuning in.