Space rockets use thrust in order to get them up into space. Thrust is the sudden, propulsive force of a jet engine, and is based on Newton’s third law. In the rocket, thrust is created from the solid rocket boosters and the main engines. The solid rocket boosters and the external fuel tank are eventually dropped from the rocket in order to reduce mass once in space. The rocket is slowed down a little because of the force due to gravity and the drag force when in the Earth’s atmosphere.

NASA has been working on a new way to launch rockets into space: the EmDrive. It is an electromagnetic propulsion drive that generates thrust by bouncing microwaves in a closed container. According to physics, this would be impossible because of the conservation of momentum and that every action has an equal and opposite reaction. However, a group in NASA has been able to generate thrust from the EmDrive in a vacuum. The power of the EmDrive allows spaceships to travel much faster, allowing humans to explore more of space than ever before. If the EmDrive does end up working, the great space exploration could be back on! So for now, we wait. 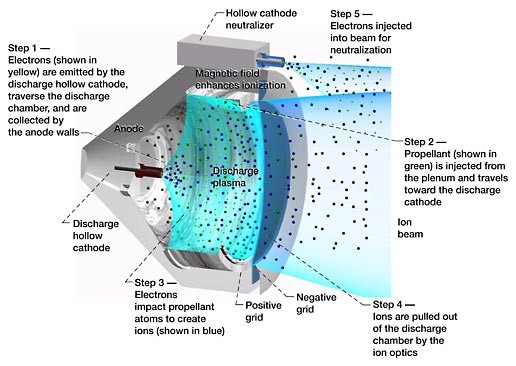