In my previous blog post, I discussed the overall interface you'll be using in Kerbal Space Program. If you don't know what you're doing, I recommend reading that first before continuing on with this post.

Before I even start with actual designs of rockets, I'm going to teach you how to build quickly and efficiently.

To start, you'll need to place down a part. Keep in mind that the first part you place down is the part you're going to have to build off of. Whenever you pick up this part, you will pick up your entire rocket. Whenever you pick up a part connected to this part, it will pick up every part placed on that part, excluding the first part. Now that you understand that, you're going to need to know how to move around effectively.

By holding right-click, you can rotate around a certain point on the center axis of your rocket. By using the scroll wheel, you can move vertically up and down. By holding Shift and using the scroll wheel, you will move closer to and farther from the center axis of your rocket (Alternatively, you could do this by holding down the middle-mouse button and moving your mouse up/down).

When building a ship,

Now we can get into some design basics.

There's a lot of things to take into account when designing a rocket, even in a video game.

Always remember to take aerodynamics into account. You can't just launch anything through the atmosphere at well over the speed of sound and expect it to be fine. Take the following, for example. 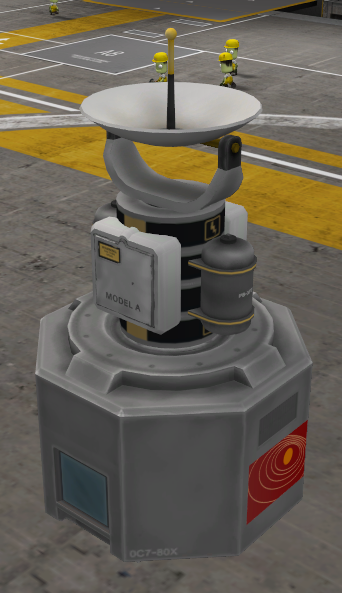 This is a simple landing can with some batteries, retractable solar panels, RCS fuel tanks, and an antenna. If you launched this through the atmosphere, something could very easily break, especially if you used the unprotected versions of the solar panels, or, lord forbid, you extended them. But then how would you get this into space? Well, there's many solutions, such as trying to fit it all inside of a cargo container, or you could make a column of octagonal struts and strap the bits onto that.

There is also one other thing in the game you can use, and it's quite stylish. First, you'd have to disconnect the entire top piece from the landing capsule, and place an "Airstream Protective Shell" on top of the capsule. When you first place it, it'll start dragging a frame with your cursor, but just right-click to temporarily remove it. Then, re-place the top piece on top of the Protective Shell part. Here's where things get interesting. Right click on the Protective Shell part, and click "Build Fairing" as shown below, then drag the frame up along your top piece, and click when you want to start to drag it in. You can use the other picture below as reference. 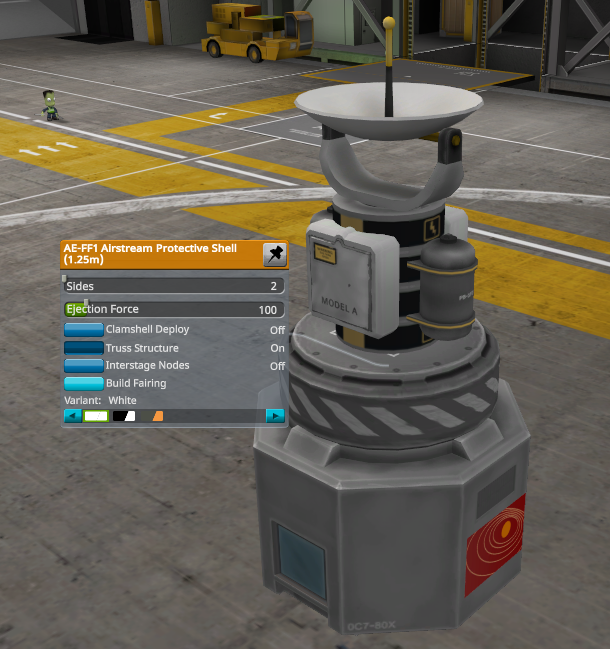 This fairing can be ejected as part of a stage when you leave the atmosphere, so the craft on the left will look like the craft on the right. Just be careful with your design for when you do eject it, because it shoots sideways.

This rocket will fly. But after a little bit, it will start to flip out of control, and plummet into the ground. But why? If you build a ship like this and deviate from being normal to the ground by even the slightest amount, air resistance kicks in, and your rocket will flip upside-down. So how do you avoid this? Simple: Add some wings. Two could work, but you should add more, just to be safe.

Another thing commonly done in KSP is when people add tons of fuel to their spacecraft, and then is surprised when they can barely get into orbit. Keep in mind that adding more fuel does let you burn longer, but also increases the weight of your rocket. Your thrusters will always put out a certain amount of force, and if you just add more fuel to your craft, you might end up with less delta-v than you started out with. We all took Mechanics, so you should know that net force is equal to mass times acceleration, so if mass goes up but force stays constant, acceleration must go down.

Some other things to think about include:

- Do you need extra power?

- Do you need power generation?

- Do you need heat reduction?

- Do you need a ladder for your Kerbal?

- Do you have a heat shield?

- Does it look nice?

- Is it powerful enough to get you where you need to go?

- Does it weigh too much?

- Do you have enough parachutes?

- Should you add high-altitude parachutes?

And, most importantly, something forgotten in the following picture. 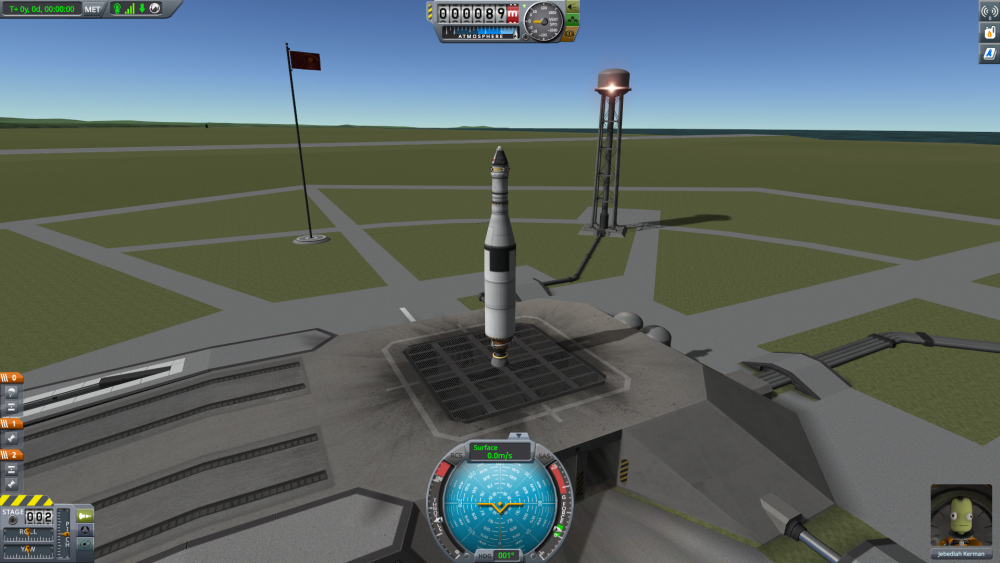 Yes, there are no wings, and it is hideous, but those aren't the biggest faults with the spacecraft.

If you look on the bottom left, it shows the staging. Every time you press the spacebar, you begin the next stage. In this case, the first stage would start the first thruster, but would also trigger the decoupler, disconnecting the main booster from the rest of the rocket. Now look at the final stage. When triggering the last decoupler to expose the heat shield for re-entry, it would also trigger the parachute, rendering it useless, and dooming poor Jebediah to crash into the planet.

Even if your design is perfect, one simple mistake in the staging could ruin everything when you least expect it, so always remember to check it before you wreck it.

In my next blog post, I'm going to discuss simple flight controls and methods.