Hi everyone! I thought this would be applicable since we're in the electricity and magnetism portion of the year

In electric fish, such as an eel or a ray, there is a body part called an "electric organ." This mass of muscle and/or nerve cells produce an electric current when the fish sees fit. It is used for protection, navigation, communication and sometimes (but not often) against prey. The organ itself consists of a group of connected electrocytes, through which the current passes through. 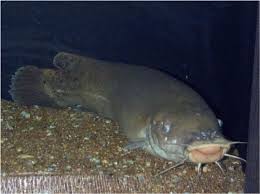 An electric catfish AKA a strongly electric fish. He might look like he wants a kiss but believe me, he doesn't.

In weakly electric fish, the organ is used for navigation as the electricity produced is too little to do harm. However, in strongly electric fish, a discharge of electricity is strong enough to be used for defense. Something interesting to note is the difference in the structures of freshwater electric fish and saltwater electric fish (this difference is also mentioned in pg. 795 of the text). Freshwater has a higher resistivity than salt water, and as a result freshwater fish release a higher amount of voltage than salt water fish in order to be effective. Another cool fact: in order to achieve this difference, the fresh water fish's electrocytes are connected in series, while the saltwater fish's electrocytes are connected in parallel. Awesome, no?