Look at this picture, because there is something horribly, horribly wrong with it. 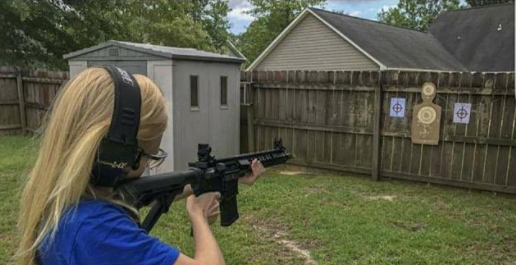 It's the fact that she's shooting at targets on a fence, with nothing to stop the bullet behind it. There's a house there: Glass could break, and people could get injured. Maybe their television or their car will be destroyed.

This picture comes from a tweet of somebody teaching their daughter how to shoot. 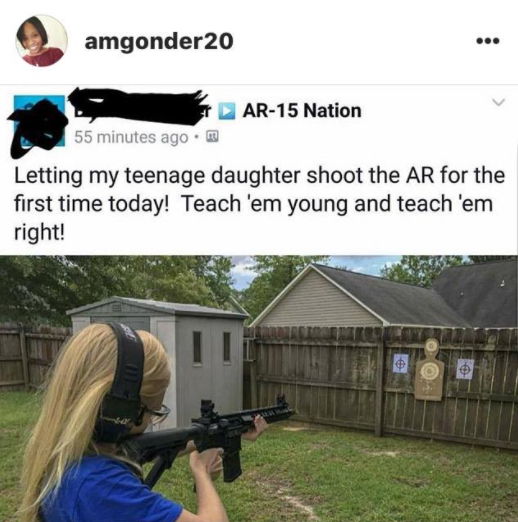 The worst part about it is that he even says "teach 'em right" which he clearly isn't doing in the slightest. Also, he says that he's letting her shoot it for the first time. For somebody that young, they probably aren't prepared to deal with the recoil. If she fell back, there's no telling where she might shoot next if she accidentally pulls the trigger again. But there's a really easy way to prevent this: Place your hand behind her shoulder to prevent her from falling, and better yet, let her kneel for her first few shots rather than stand. It might not be the manliest way to shoot, but it's how I started.

Sadly, the world is filled with people like this, and lots of people are injured every day. What's even more sad, is that people start to blame the guns rather than the users.

Now don't you start thinking that I am pro-guns and that I think every household should have firearms, because I don't. I am pro-intelligence. Guns SHOULD be regulated because of idiots like this, but I don't think that they should be banned.

Back to my point, there's so many easy ways to safely go target shooting. For starters, you could go to a shooting range. Crazy, right? It's probably the safest option, since there are plenty of other experienced people there that will help out and prevent others from doing something stupid. But if you don't want to do that, you could always alter your setup. When I go target shooting, I usually go to my uncle's house. He owns a few acres of land near Dansville. His setup is really simple: We go in his backyard, and set up some folding tables on flat ground. We keep every firearm unloaded unless it's about to be fired. Then, we fire towards a hill he has in his backyard, that way stray bullets always end up in the dirt behind our targets, rather than traveling into populated areas. When we finish, we pick up all of the spent casings on the ground, and do some more packing and cleanup. We use common sense, and only point firearms downrange. Nobody gets hurt.

I cannot stress this enough, so I'm going to bold it, underline it, italicize it, enlarge it, and give it it's own line of text.

IF YOU'RE EVER GOING TO BE NEAR A GUN, BE SAFE, AND USE COMMON SENSE. YOU AREN'T THE ONLY ONE IN DANGER.