At this point I am so beyond tired that all I can think about is the time, hence the physics of a clock blog post idea. However just as i became so tired that this idea popped into my mind and I became outrageously enthused and will make this a wonderful thirtieth blog post!!

There are many methods of operation clocks utilize. These are the spring loaded, pendulum/weight powered and even more modern clock variations which i will explain later. Most of the modern clocks now utilize these next few methods for keeping time. All but the quartz watchs use a device known as an escape mechanism. This escape mechanism serves a very inportant purpose because it regulates the forces applied to turn the clock gears in such a way that they move only a certain amount per second. Regardless of its type, each click has this crucial escape mechanism. The escape mechanism works by transfering the force driving the gears to turn (whether it that force is caused by trasfering the gravitational force from a weight or the force transformed from battery power) into an oscillating mechanism which could be in the form of a pendulum, a spring, or a verge-and-foliot. The oscillating pieces work as the clock's counting mechanism and through the use of gears, the clock is able to keep accurate time.

A spring loaded clock utilizes the potential energy stored in a wound spring to turn gears that are then stopped and restarted by the escape mechanism which makes the movements of the watches hands move at a certain rate. The main disadvantage of this type of time keeping device is that the spring needs to be wound up periodically or else the resulting placement of the hands will be inaccurate. 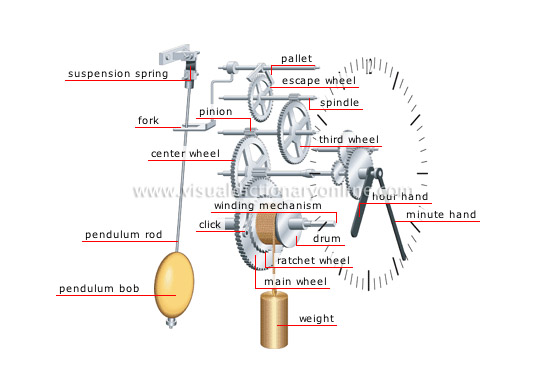