It has all happened to us, even the professionals face this problem: The 7-10 split. When we are faced with the 7-10 split situation, the most common action to take is to aim for one pin and accept that you will only score 9 in that frame. After all, one pin is better than no pin!

But what if you want to get both of the pins? The feeling would be extremely awesome! If you do not feel extremely awesome after you successfully get a spare in that situation, then you must be an extremely humble person because even among the professionals, there is only a 0.7% chance that a bowler will achieve a spare in the 7-10 split situation.

However! The 7-10 split is not the hardest situation that could be presented to even professional bowlers. There are actually two more pin configurations that provide an even smaller success rate than the 7-10 split: 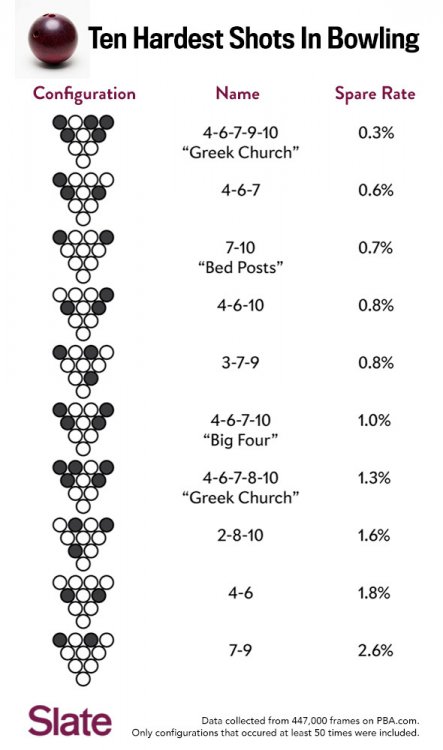 Clearly, the "Greek Church" and the 4-6-7 split are harder shots, with a 0.3% and a 0.6% spare rate respectively. Chances are, however, that somebody who does not bowl very often will most likely never get a spare on nearly any of the configurations in the picture.

How does this relate to physics? Well, bowling has many variables in it that relate to physics. These include the type of ball that one uses, the speed of the ball by the time it strikes the pins, the amount of spin put on the ball as it is thrown, and the list goes on. It is simply interesting to see that due to the variables in the physics of bowling, that some spares are harder to make than others even when it would seem otherwise. Generally, somebody may assume that because the two pins are lined up on exact opposite corners of the lane that it is the hardest shot, but that is not true. In reality, there shots with which the physics of bowling provides an even greater challenge than that of the 7-10 split that do not seem like they would be harder. It is all up to chance... and maybe a little bit of skill.

If you would like to read more about the hardest shots in bowling: http://www.slate.com/articles/sports/sports_nut/2015/02/hardest_shot_in_bowling_it_s_not_the_7_10_split_it_s_the_greek_church.html