Now that I have gotten your attention with this gif of a kitty skydiving, welcome to the science of cats surviving large falls.

Everybody says "Cats always land on their feet!" They say this because it is not often that cats fail miserably and crash to the ground in a big fluffy mess. Cats do not land on their feet just because they are awesome, but due to their fantastic reflexes and skills, as well as their great surface area compared to their small weight.

Before we discuss these factors of kitty science, we must understand that cats like to live in trees. Cat owners most likely find their cats in high places and it is common to see a neighborhood cat on a roof of a house. Cats do what cats do, and cats do enjoy doing cat things in trees. 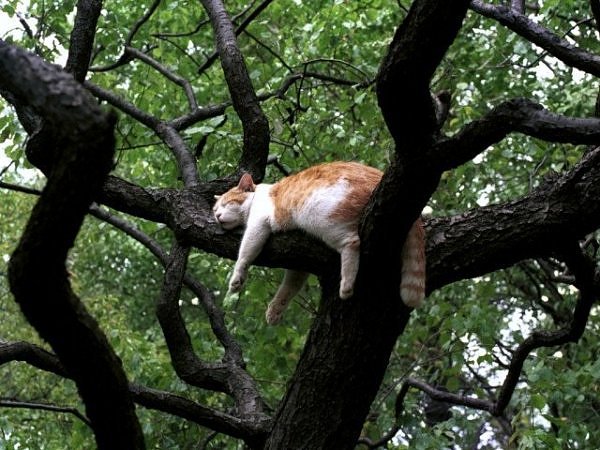 Now, science! Cats have evolved over the course of their existence to survive falls from trees and other high places. Imagine a cat is hunting a squirrel to eat for lunch and it jumps from one branch to the branch the squirrel is on, and for some reason the cat misses and falls. The cat's instincts have been developed enough to turn it right side up. This sort of cat magic is observed in this awesome video:

This video is so awesome because the cat is dropped from a safe distance and every time except for one, it is dropped into a cushioned box. (No animal cruelty here!) It also shows slow motion of the cat flipping its body so it lands on its feet!

In the video, it is also easy to see the cat using its legs to lengthen the time of the impact and putting a lot of the energy from the impact into its joints like a spring. Cats have well developed legs for impact, which is another evolutionary trait they have that helps them survive their falls.

But what about that one cat that fell from a building 32 stories up and survived? Well, a human would probably not survive that kind of fall because the terminal velocity of a human is around 120 MPH and we do not have super springy legs or magic to make us upright. Kitties, on the other hand, have a terminal velocity of around 60 MPH -- this is due to the spreading of their legs as seen in the gif above, and the large surface area they have compared to their weight. 60 MPH is a lot easier to survive than 120 MPH when hitting the ground!